Our hand cards are designed to combine comfort and function in an essential tool for the hand spinner. 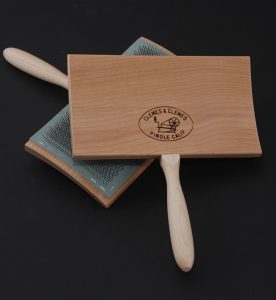 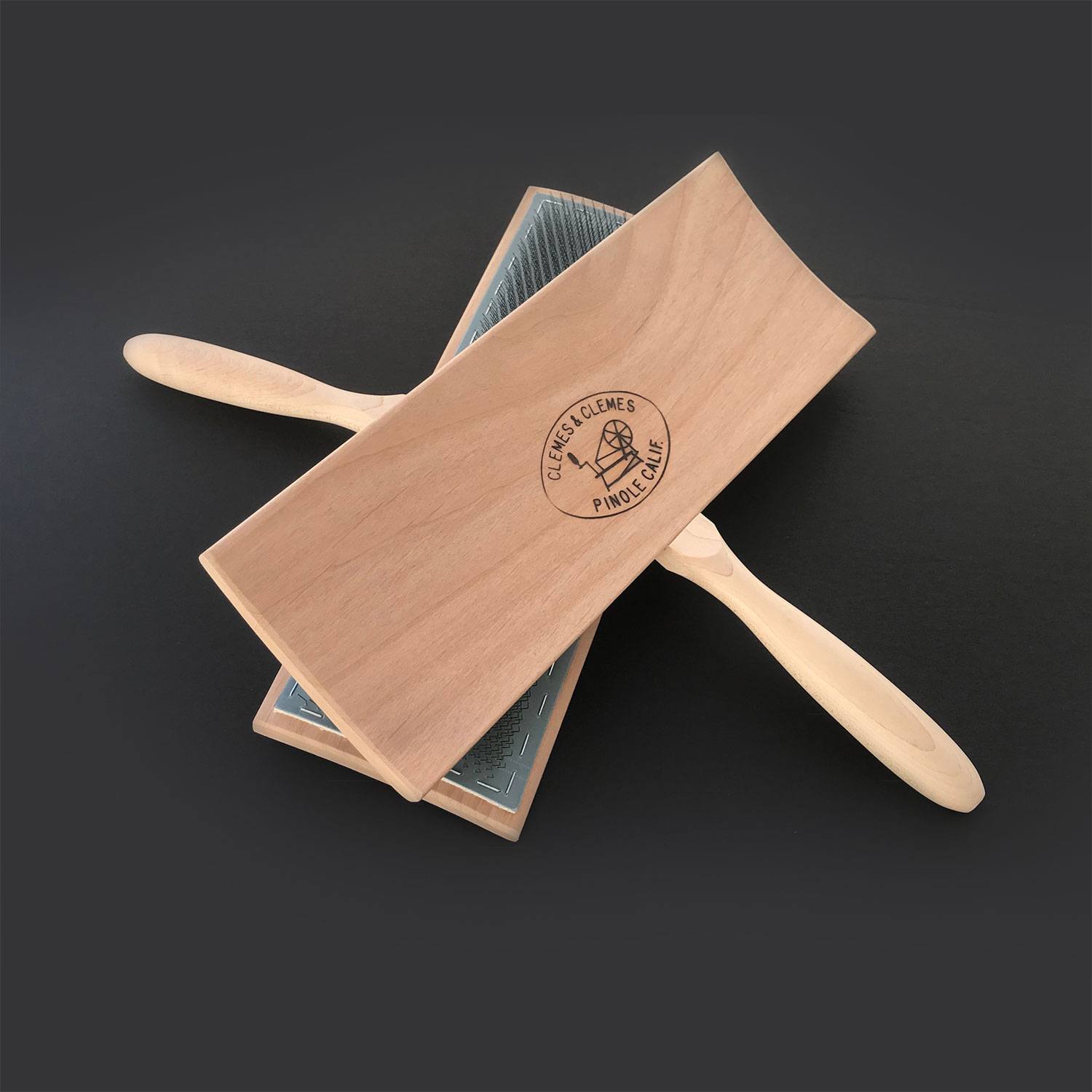 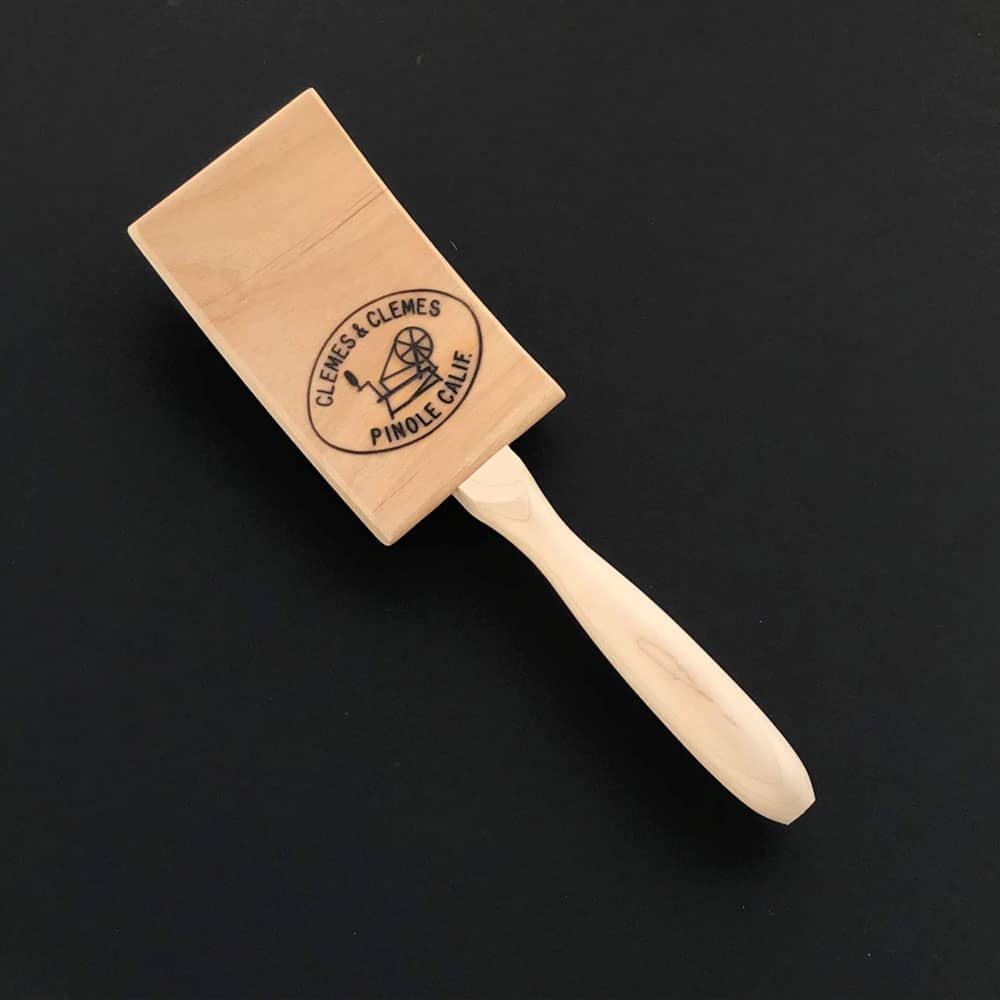 History of our Hand Cards

We use turned maple handles which provide a comfortable and ergonomic grip for both small and large hands. The handle is tenoned into an alder wood back to ensure long life. The teeth are set in a strong yet flexible foundation to provide many years of use - we regularly hear from customers who purchased their hand cards decades ago and still use them regularly. In our experience, the two styles of cards we offer – cotton and wool – are all that is needed to card any type of fiber.

Hand cards have been made in the United States since the Revolutionary War. Due in part to the British Blockade, the colonists had to process all their own wool and cotton, and began making the tools to do so. The demand for hand cards was so great that dozens of companies were formed with the sole purpose of making hand cards. By the end of the 1790’s, once the fever pitch of the war died down and trade opened up, only a handful of companies remained. With the advent of powered carding machines in the early and mid-nineteenth century hand cards soon fell out of favor and with them, the companies and the equipment they made. By the time we began making spinning wheels in 1971, hand cards for wool had not been made in the US for over half a century. The only cards available in the United States were horse cards made for grooming - they were heavy and did not card wool very well.

Henry had seen a few pairs of actual hand cards – imported from Sweden and Finland - while working for Tony Cardarelle prior to Tony’s death in 1970. He contacted the makers of those cards and was told they would only be able to supply a couple dozen pair about every six weeks.  He was told the carding pads were the bottleneck - they were made by hand, literally inserting one pair of teeth at a time just as had been done in the US in the 18th century. The foundation was leather and all the holes were punched at one time, but inserting approximately 900 staples by hand was slow work.

There were other problems with the imported cards as well. The average life of a pair of hand cards was under a year even when they were marked left and right and care was taken to always use them that way. The leather foundation became hard to come by so vinyl was substituted and while production increased as the teeth could be placed in the vinyl faster, the life of the vinyl foundation was about half that of the leather.

It became apparent that if our company – and the hand spinning community in the US – was to continue to grow, that a reliable source of hand cards was needed. In 1972, Henry was determined to solve the many problems with hand cards by creating a readily available, durable hand card unlike anything that was currently being made.

Reinvention of our Hand Cards

Naturally, he started by redesigning the wooden components. For the back, he initially chose Douglas fir, similar to what had been used on Finish and Swedish cards. He worked with a local mill to get the curve just the way he wanted it – thick near the handle, then tapering at the top – so that the weight was closer to the palm. He chose maple for the handle as it is a very durable hardwood that would put the weight of the card in the palm of the user’s hands. He turned a sample handle that would be comfortable in any size hand, then custom ground a set of lathe knives so it could be quickly and easily replicated. He joined the curved back and handle with a tenon – one of the oldest, strongest and most reliable wood joints. With the wooden parts figured out, he just needed to find card cloth that would last more than a few months.

He scoured the country looking for a company to make card clothing pads. Card clothing is used for all kinds of things that have nothing to do with the fiber arts - straining tomato juice, cleaning pipelines, raising the knap on carpets and paint rollers.  It was available in many different sizes and shapes but mostly as fillet (1-2” wide strips) for use on large powered machines. No one in the US was making pads. Finally, a company in North Carolina said they had some old machines that hadn’t been used in decades. They would set them up to produce a pad if Henry would supply the specifications.

A foundation of vulcanized rubber and canvas was settled on as being durable and not too expensive. The wire size and type was chosen and Henry provided the angles and knee height (bend) he was looking for. After a few weeks the first samples arrived. Once they were stapled on the wooden backs it was time for testing. It didn’t take long to find out that the new cards were superior to the imported ones in every way.

Henry’s hand cards were an instant success. With the help of his father, he began producing dozens of pairs a week, eventually ramping up to several thousand pairs a year to keep up with demand. The only downside – from his point of view – is that he had over engineered them. Whereas the cards he imported lasted less than a year, he was no longer seeing repeat customers. Over four decades later, we still regularly hear from customers who have their original pair from the 1970’s, or who inherited theirs from a mother or grandmother.

The hand cards we make today are nearly identical to the early pairs we made. After a few months of production, the wooden back material was changed from fir to alder, a species known for being durable yet lightweight. This produced a lighter more durable card with less chance for splitting and splinters. They are still produced with alder backs and a maple handle tenoned into the back today. The pad Henry designed and we continue to use to this day, became the standard of the industry– as other companies produced carders they copied his design.  Best of all, Clemes & Clemes Hand Cards will still last for a lifetime of use with joyous and ergonomic carding.